This is a continuation of my last post.  If you haven't read it, take a minute and go here.
So, JennJ and I prepare for our girls' boondoggle to the Big City...the A-T-L.  You know, I don't know why we don't venture over there more often.  It's only an hour and a half away and it has SO much to do!  We leave work and head to my house where we transfer Jenn's stuff to my car.  We have the goody-baskets for the authors we are going to meet. We have our overnight bags. We have our refreshments (vodka, grapefruit juice, Combos and beef jerky) so we head East!

We cruise at 70-75 mph the majority of the way...then we hit the city itself and I remember why we hardly ever come over here.  I loathe the traffic.  It is only 1:00 pm local time and I still get honked at three times and miss one exit trying to find my hotel.  We decide to go to the bookstore and get out tickets to the event before checking into the hotel since we're a little off the path already anyway.  Am really hating Atlanta traffic...it's better off of the interstate, where they are actively trying to kill you...but for some reason streets will be named one thing going in one direction and another thing going in the opposite direction.  Also? Siri is making me crazy. "Turn Northeast onto Peachtree Lane Avenue Road..."  I mean, really!  What the hell is that?  Do I look like a boy scout? I can't just whip out a compass...what happened to "right" and "left?"  JennJ and I are trying to determine which way the sun is moving as someone else blows their horn at us.  I randomly choose a direction and Siri tells me she's "Recalculating the route". Bitch.  And we are on Peachtree Avenue Road, not Peachtree Lane Avenue Road.  Hate Atlanta driving.  Somehow we manage to stumble upon the correct Barnes and Noble, go in, purchase our books and get our event tickets!

We spend a bit more time looking at our directions to the hotel while still parked at the bookstore (it is 2.1 miles away...surely to God we can do this.)  And we do...I only have to perform one U-turn and it was one that Siri TOLD me to make.  I think she has lost her ever-loving computer mind. When the directions were, "In .4 miles, make a U-turn" JennJ and I just looked at each other...then Jenn shut her eyes and I popped a U-ey and suddenly, we were going up the drive to the hotel.  No one even honked at us that time.  We unload our crap and mix ourselves a restorative beverage to recover from the harrowing journey.

We've got about three hours before the book event starts, so we head out in search of a place to get a snack and have a drink.  We're in Buckhead, right?  Lots of bars and restaurants and such.  Well, apparently, nothing opens until evening...so we wander around a bit until we see a Sports-bar-looking establishment.  It's called Twin Peaks...and it looks all hunter-lodge-themed. We park and walk into the restaurant, where we are greeted by a pack of scantily clad, well-endowed, 20-something ladies.  Ohhhh...Twin Peaks...I get it now.  Nonetheless, we are here now, the ladies are being extremely attentive even though we aren't their typical clientele, and we're still mighty thirsty.  We order some chips, queso and a couple of martinis.  I have recently been converted to Hendrix gin, and unfortunately, the Tanquery isn't doin' it for me today.  I give JennJ mine and switch off to beer.  Let me pause for a minute here.  Going anywhere with JennJ has its pros and cons.  The pros are numerous.  She usually gets drinks bought for her. There are lots of heads that turn in her direction, so if you're with her, you're near the focal point of any room.  The cons are that you yourself are not going to get noticed except as her friend that will need to be glanced at every now and again so as not to appear rude.  My sweet friend JennJ is exceptionally beautiful: 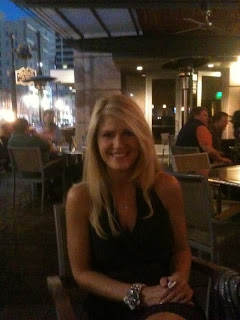 And I'd absolutely hate her if I didn't love her so much.  I know how much I suffer by comparison sitting next to her: 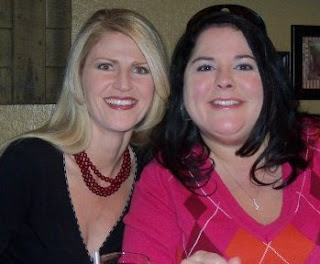 But as I've been happily married for 23 years, I can just content myself on occasionally getting a free drink sent my way as well in an attempt to get the lovely JennJ's attention.
Another con?  JennJ attracts ALL SORTS of male attention.  That afternoon at Twin Peaks, we encountered: This is Andy. I think he was a pirate.  He scratched his elbow A LOT.  The salt air must not be good for his eczema.  Do you know why I was able to take this picture? Because Andy-the-Pirate's gaze never wavered from looking at JennJ. He kept trying to get a commitment out of her that we (or actually she...I'm not sure he knew I was even sitting there) would come back to Twin Peaks after the book event. We were finally rescued from AtP's swash-buckling by none other than the establishment's owners.  They sent us a couple of drinks and asked if we'd stop by and chat.  Our waitresses and bartenders (there was a shift change while we were there) had told them that we were from Alabama.  They are opening a location in Huntsville next week and were interested in our opinion of their franchise.  Very nice men.  I wish them well.  And if all of their staff are as friendly, courteous and helpful as the ladies that waited on us, they should be a roaring success in Huntsville.  All of the boobs and booty shorts will probably be well received too. (I do want to re-emphasize that despite their lack of coverage and their abundance of cleavage, I have RARELY received the level of service that I did from these chicks.  I DON'T want to take away from that at all)
From Twin Peaks, we found our way back to the bookstore.  Let me just tell you guys:

We had a nice gathering of about 60-75 people.  Not too many to be completely overwhelming.  And the ladies themselves were beyond awesome.  First up to the podium was Quinn Cummings: 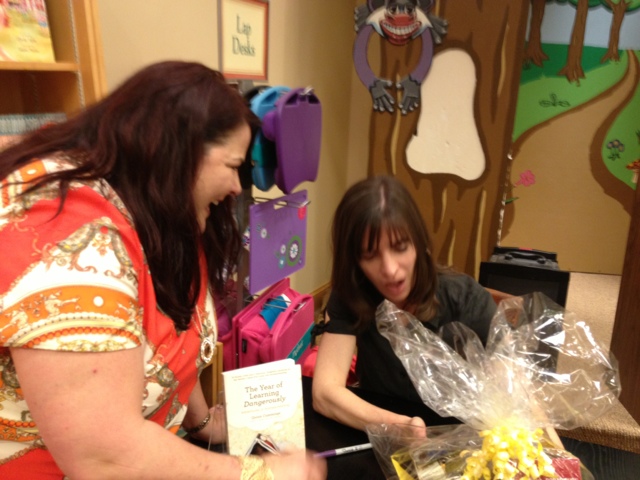 She's always writing on her blog about how awkward she is...I found her to be absolutely charming, so I don't know why she's always going on about being otherwise.  Her hair, bangs and all looked fabulous, even in our southern humidity.
Next up was Laurie Notaro:

Sorry about the crappy picture.  I suck at taking them.  Anyway...she was an absolute HOOT!  I am so glad I got to hear her...and I can't wait to start reading her work.  The bit she read to us from her new book had the whole crowd howling.  Also, the woman can freaking ROCK the red lipstick.

And then there was Jen Lancaster: 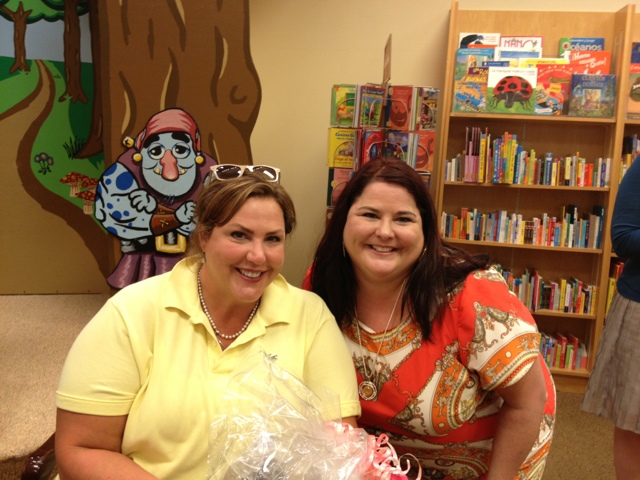 She was so cute.  The pop-collared Lacoste, the pearls, the madras capris...adorable.  And FUNNY!  I love this picture JennJ took of us...though I don't know what the hell the polka-dotted cartoon pirate photo-bombing us is all about. (I certainly have encountered many more pirates on this trip than I had expected).  Seriously, folks...she needs to tell us all what she's using on her skin because she's absolutely RADIANT.
She was so gracious about getting her gift basket (I have to be honest here...I had a moment when I was giving them out where I felt a little like Ralphie in A Christmas Story. You know...everyone else is bringing the teacher an apple and Ralphie comes up with this gi-normous fruit basket with a pineapple in it?)
I hope I didn't come across as too squeal-y, fan-girl-y...or at least I came across as  a non-stalker-y fan-girl.
With the gift baskets distributed and my autographs secured...JennJ & I gathered up and went out into the night in pursuit of dinner.
To be continued....(again, I know! But this post is getting too long and there's much more of the night ahead.)
Posted by Unknown at 2:24 PM