I have to admit that I was pretty slow to come to support gay marriage.  I've always believed that some people are born gay...but 15 years ago I would have said that I didn't understand why civil unions couldn't be sufficient to protect things like property rights and power of attorney and all of the legal things that needed protecting.

What has changed my mind about the right for gay people to marry hasn't been the changes that have been made to the laws of this country.  I began changing my mind about this issue as I began witnessing real people in real marriages (even if they weren't legal).  I'd like to introduce you to a couple of couples who were fundamental in changing my beliefs. 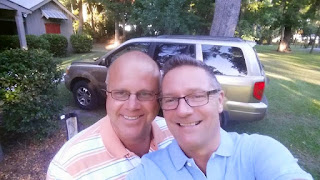 On the left is Don, on the right is Dustin.  I went to high school and graduated with Dustin (back then, we all called him Dusty).  I have forever loved Dusty.  I have ALWAYS known he was gay.  Well, let me caveat here for a minute.  When we all got together for our ten year reunion, Dusty was telling us all about how the things he and "Dawn" had been doing. "Dawn and I went on vacation here." "Dawn just loves that restaurant." "I am so glad that Dawn got these shoes for me." "Dawn and I just love living in Atlanta." "I sure wish "Dawn" could have come with me." And I thought to myself, "Hmpf...I always thought Dusty was gay.  But he seems just so happy with this "Dawn", Whaddyaknow?"
Then a year or two after the reunion a bunch of us classmates just met up with our spouses at informal gathering.  That's when Dusty introduced us to "Dawn"...aaannnd, it turns out that Dusty's Southern accent is just a tich thicker than most and that "Dawn" is how "Don" is pronounced in Dusty-speak.
Anyway, it was at this gathering that I had my first real epiphany.  The conversation went something like this:

Dustin: And then I came into the dining room and right there on the table written in the half inch of dust was, "Hi! I'm Dusty! And Dusty should dust me!"

Don: It was funny, and it was you who forgot to dust the table.

Dustin: It was NOT funny. And honestly, it would have taken you, what? 25 seconds more to just dust the table instead of leaving it like that?

Don: Yeah, well, I cleaned out the birds' cages, you know.

And I thought to myself, "Holy crap! These two are so married."

In the ensuing years, I have watched Don and Dustin as they loved and supported each other through good times like vacations and holidays and graduations (Dustin went back to school and got his nursing degree! He rocks!) and bad times, like when Dustin dealt with the long illness and eventual death of his mother.  Don was a rock for him during the whole time Dustin's mom fought cancer...he was there with him supporting him during the funeral.
You really can't be around those two and not KNOW that they belong together.

Here's the other couple that has really impacted me: 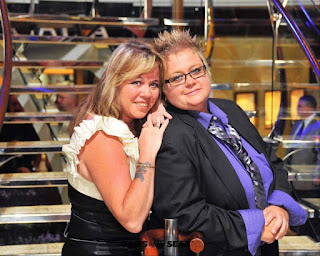 This is Cyndi and Lea.  Lea also went to my high school, but was a couple of years older than me.  I was friends with her sister, Lisa, who graduated the same year I did.  I knew Lea, but not well...just in passing.  However, when Facebook really became a thing, we became Facebook friends.
She posted pictures of their wedding (I think in 2009ish?): 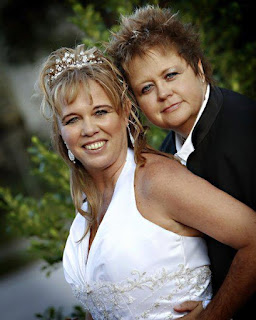 And their wedding photos have always been some of my all-time favorites.  EVERYONE in them looks happy and like they are having fun.  Lea and Cyndi are obviously blissfully, happily in love.
And you know what else I love about being Facebook friends with Lea?  How often she posts about the church sermon she heard on Sunday, how often she is praying for this person or that...I've never met Cyndi, but I know that Lea posts frequently how blessed she is to have her in her life helping her get through the thick and thin.
Just last month, she posted a photograph of their son, Dakota getting baptized...with comments about how proud she and Cyn were of him.
So, here's what I think.  These guys?  They represent what marriage is about a whole lot better than many, many heterosexual couples.  Dustin and Don have been together 25 years.  And now that they can legally marry?  They will be doing that in a couple of weeks.  I think it's unbelievably touching that they have been together for a quarter of a century and still want to marry each other.
As for Lea and Cyndi...they are raising their children in a God-loving Christian home.  They attend church regularly, they participate in a good many charitable functions.  (They also ride Harleys which I think is completely bad-ass.)
Neither of these couples are a threat to "the family."  And I can see why a sterile "civil union" is not enough.
When the SCOTUS decision was made yesterday, I found out about it from Dustin's Facebook post...where he announced that he and Don would be getting married when Don got back from a trip.  He said that they would be "hollering "it's my wedding day, it's my wedding day" in their best Boudreaux voices!!!
I knew immediately what I wanted to get them for their wedding.  Boudreaux reminded me of Bordeaux, and my friend Janet Prosser who owns a wine store had introduced me to the perfect Bordeaux for my two little ole gettin' married Boudreauxs: 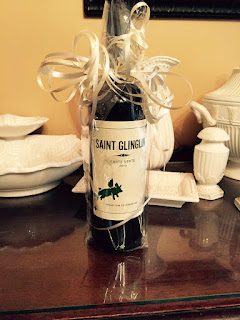 When I ran down to her store to get it, she had one bottle left...when I told her what it was for, she went ahead and gussied it up in wedding ribbon for me.
The loose translation of "Saint Glinglin" is "When Pigs Fly".  The literal translation is "Probably never."
I know that's when a lot of folks thought that legalized gay marriage would happen.
I think it's an appropriate wine to celebrate that it finally happened. (It's also very tasty)
P.S. I know what is in Leviticus and Romans.  So, I do realize what the Bible says. But to quote my beloved Granny regarding the Bible, "Honey, obey the words in red. Take the rest into consideration."
Posted by Unknown at 1:25 PM