I think I may be on the trail of discovering a new species of hawk in Alabama.
I have often seen Buteo Jaicenis (Red-tailed hawks):

Both of these species of hawk are well known for their eyesight, their piercing scream and their hunting prowess.

That's why I believe that the hawk that lives in my neighborhood is perhaps a new species, unrelated to these fierce, efficient hunters.
This new hawk will be named Buteo Bytrum-digitus, or the Butter-fingered hawk.  I suspect that this hawk is pretty rare...possibly on the verge of extinction before it is ever properly discovered and its existence documented.  My suspicions are based on the fact that this hawk seems lose at least half of its meal every time it hunts.

Also, it appears that this majestic bird of prey is indigenous to my back yard. The first sighting of the Butter-fingered Hawk happened while the whole family was outside on our (very weathered) deck.  Jeff and I were standing on the deck.  The kiddo was throwing a ball to the dogs.  Then we heard this shriek!  All movement stopped and we saw something small come plummeting toward us.  The three of us all sorta ducked for cover....then we heard a small, kind of wet-sounding thud:

Well, there's something you don't nearly get hit in the head with every day...a chipmunk butt.  Like, LITERALLY a chipmunk butt.  Jeff shot a quick pic and then had to wrestle the chipmunk half away from the dogs.  They assumed that it had started raining manna from Heaven.

A few weeks later, I went to the edge of the yard to check the blueberry bushes we have there and caught the odor of something foul.  I didn't actually SEE the Butter-fingered Hawk this time...but this certainly seemed to fit his M.O: 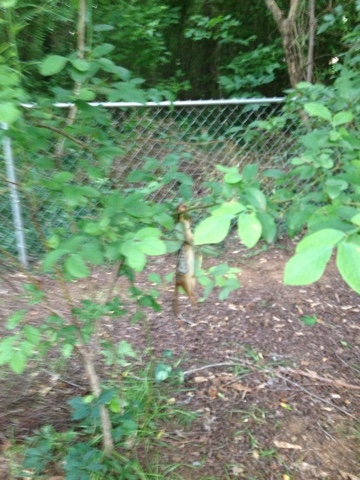 Yes, my photo is blurry but that's because I was trying not to toss my cookies at the overpowering stench of the rotting chipmunk carcass.  The dogs wanted me to give it to them SOOOOO BAD. (Not happening, you fie-hounds.  I don't care how DELICIOUS it seemed, or how much fun you would have had rolling all over this gooey carcass until you smelled like Hell on a Rampage, no dead chipmunk for you!)


So...be on the lookout for sightings of this rare and wonderful (if you are a dog) bird.  Also...be ready to duck, because...ew.

The skinny about (my) fat

Once upon a time, through no fault (or merit) of my own, I was a thin person. 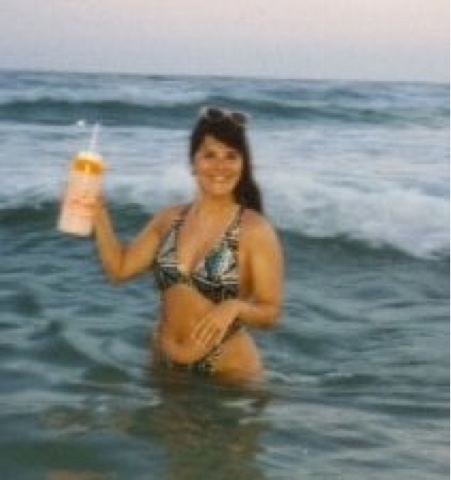 Then I got fat.


I wish I had a good reason to put here for why I got fat.  For awhile...about 15 years ago, I went to Weight Watchers meetings and heard all kinds of reasons for getting fat.  From physical...like thyroid problems and low metabolism...to psychological...like "eating your feelings" and stress eating, etc.  Here's the truth behind my weight gain:


1. I like to eat food that tastes good.  Sadly, good-tasting food is usually high in fat and/or calories.  That's why it TASTES good.


2. Unless I can pretty much count on an orgasm at the end of it...I do not like activities that make me sweat.


That is it.  Period.  I was not suffering from self-esteem issues.  I was not compensating because I was never my mother's favorite.  I did not equate food with love.


I was simply taking in more calories than I was expending.  And I did it for 24+ years.

Now, I would like to point out that at no point was I hating my life.  In the picture above?  The project that I had been working on for the past 10 years of my life was being inducted into the Alabama Engineering Hall of Fame.  I was part of that because I am a damn good engineer.
I have a husband that I love.  We have a beautiful daughter.  We live in a nice house.  I love my job and my friends and my family and my pets.  And even at my heaviest, when I was tipping the scales at over 250 pounds (how much over...that's between me and my doctor) I didn't hate the way I looked.  I knew that I was overweight...but I never considered myself in the gag-a-goat ugly category because of it.

So I kept right on going...until I went too far.
That extra poundage was taking a toll on my health.

That last one led me to Dr. Black.  I HAD to have a Nissen procedure.  And he recommended I have a gastric sleeve procedure as well.  Because I was fat.  Too fat.  Life-shortening fat.  Dr. Black is a fantastic doctor...but he's not gonna pull any punches and pat your head and tell you it's okay because you still have a pretty face.

But then again, I still had my two basic problems...love of good food and hate of non-orgasmic physical activities.  Wasn't I just gonna end up where I started?

Well...happily, when they go in and cut out a large portion of your stomach...they cut out the section that produces the hormones that tell you that you are hungry.  Also...and the "why" of this was never really explained to me...your tastes change.  I still want what I want...but what I want is now different.  Fried and dough-y foods make me cringe now.  I used to LOVE bread...now?  Meh.  Fruits and veggies taste better now.  No lie.

As far as exercise...for the first six weeks, the injunction was: "Walk or you'll get a blood clot that will kill you."  Soooo...that was motivation.  I do hate to sweat...but I hate to die even worse.

A friend of mine had this on his Facebook feed: 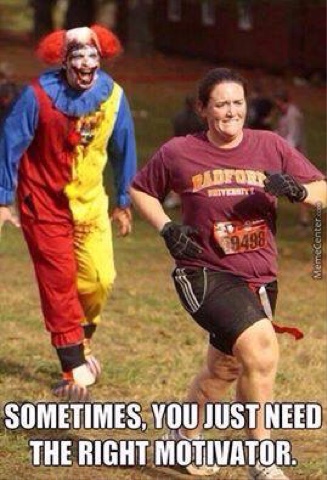 After the 6 weeks?  "Exercise or you will have great big rolls of extra skin that you will have to have a painful surgery to get rid of."  Anyone who knows me knows that I am a wienie.  A big ole chicken wienie.  I don't like pain or stitches or drain tubes or any of that.  20 minutes a day on a treadmill for pain avoidance?  Done.

And so far?  I am headed in the right direction:

I have to tell you... I feel great.  My sleep is SO much better.  The apnea thing is long gone and I haven't had heartburn at all.  My energy levels are fantastic (partly from not lugging around the 48 pounds that I've lost so far...partly from getting a decent night's sleep).

And I can't lie...I'm pretty excited about the fact that I am ALMOST at the point where I can shop in the regular section and not in the "Plus" section (usually the three racks over by the bathroom/customer service area).

It's a bit embarrassing to just throw it out there that I let myself get so far out of hand.  It's embarrassing to admit that I couldn't get myself back IN hand without help.  But there it is.  I got too fat and I needed help to get un-fat.

This is really one of the nicest things I've ever done for myself.  Wish me luck on the rest of the journey...

During this political season, I'd like to remind everyone that NO ONE does a political sex scandal like we do them in the south.

Last week, we had a prime example.

Benny is 71.  He was co-host of a local public access political program called "In the Interest of the People."

This is Larry and Charlotte: 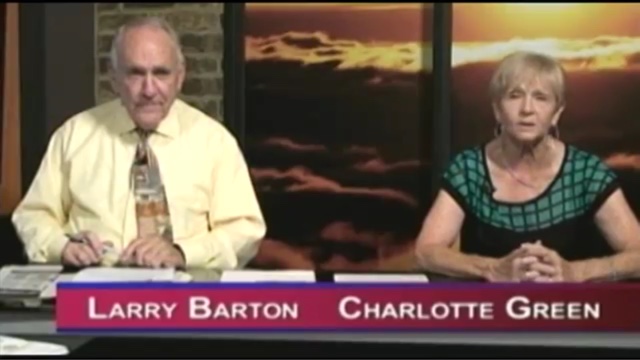 Larry is Benny's best friend.  Additionally, he is the mayor.  He is 74 years old.  To Larry's left is Charlotte...she's Benny's wife.  She would co-host in Benny's place sometimes when Benny was too busy for "In the Interest of the People."  She is also a local business owner.

Apparently, Benny was a little worried about his dear wife working all of the late hours that she was working at the little ole shop she owned...a liquor store.  Also, I'm sure he was also concerned that something would happen to his good friend Mayor Larry, who often did the books for Charlotte.  So he installed a camera.

I guess in the little town of Talladega, AL, "doing the books" is code for what Shakespeare called, "Making the beast with two backs." (Shakespeare really said that...look it up.)  Someone who has seen the video told the local newspaper that the activities recorded were "full blown"  (hahah, full blown...snort) and "gives me hope for when I'm 70."

In a surprise to no one, Benny and Charlotte filed for divorce.  Benny also decided to quit co-hosting "In the Interest of the People."

Evidently, withdrawing his talent and wit from "In the Interest of the People" was not enough vengeance for Beny.  So last Saturday, Benny road a bicycle over 13 miles in August in Alabama where it is approximately 112 degrees in the shade to lie in wait for Larry outside of the place where Larry cuts hair as a part-time job when he isn't busy mayoring. (Still not making it up).  When Larry arrived to begin his day of hair cutting and styling, Benny jumped him and commenced to whaling on Larry with an object that resembled a sawed-off baseball bat.  (That's what the paper said.  I'm going to assume it WAS, in fact, a sawed-off baseball bat because I can't imagine what else resembles one.)

Benny had disguised himself by wearing some sort of garment with a hood (did I mention the part where it is hotter than the hinges of Hell here in Alabama?)  But in the middle of getting whomped-up-on, Larry pulled the hood off and realized that his assailant was his cuckolded former friend, Benny.  To quote the good mayor, "I was able to stand up and kneed him in the balls.  Then I kicked him there twice."  At this point, Benny got himself up off the ground and tried to make a get-away on his (God help us all) bicycle, but was detained by bystanders.  (Please remember with all of the bats and balls and bikes, that these guys are not 12, they are in their 70s)
Sometime during this whole fracas, someone called the popo, who showed up in time to cart Benny away where he was arrested and placed under a $150,000 bond.

Mayor Larry was taken to a nearby hospital where he gave his account of events to the police and then later the media...his wife, Mary, was loyally by his side.

Mary, honey, here's some advice.  There's not a judge in the world who won't award you EVERYTHING at this point.

I have no idea what Benny is looking like following all of this, but here's a picture of Mayor Larry (wearing his best Fruit of the Loom T-shirt): 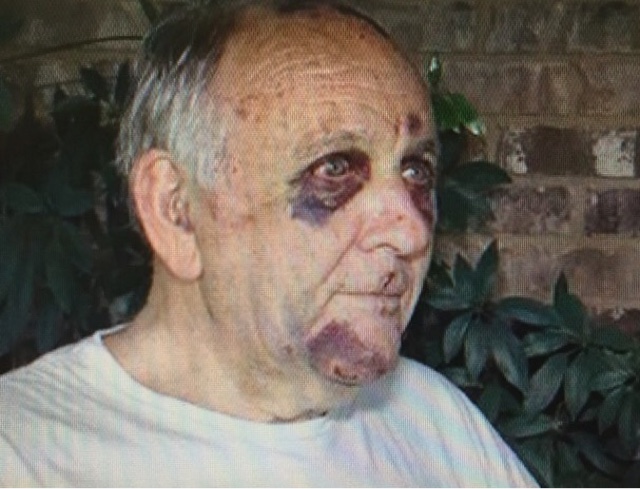 New Panda, China No. 1 Buffet, and Panda Express are all vying for Mayor Larry to become their new spokesman. (Wait for it....)(Hat tip to my friend, Bobby.)
Update: Bobby sent me this...I had to share: 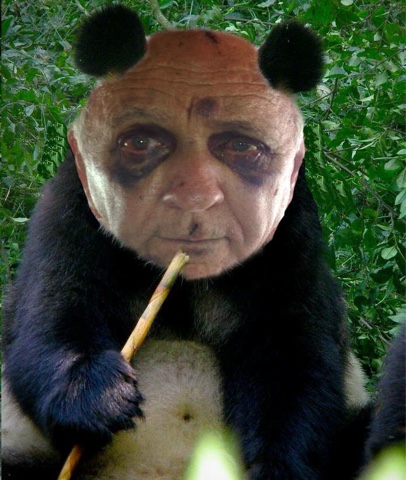