...it apparently runs right under my flippin foyer.

It all started with problems with our heating and air.  We decided after all the trouble we had been experiencing from the guy who had been working on our system, we'd make a change.  Instead of a friend of a friend of my dad's who always seemed a leeeedle shady, we went with someone who had, you know, a business license.

HVAC guy comes over...goes under the house to look at the unit under there...

"Ummm...I don't know how to tell you this, but you're going to have to replace the whole unit."

Not a huge surprise...because it was the one orginally put in when the house was built...25 years ago or so.

"Oh. And your floor.  You're going to have to replace your floor too."

Apparently, lo, all these many years, the drainage on our front steps has been for shit.  Water has just been seeping under the door sill and soaking into the subflooring and floor joists and rotting.  Since we had tile in that area we never knew.

HVAC guy calls in someone who he's worked with before to assess the damage.  The floor guy informs us that the only thing holding the floor together at this point is the dirt on top of it.  If I had ever mopped, one of us would have probably fallen through by this point.  I guess we're lucky I'm such a slob.

For a whole week, we had to avoid the area...Jeff actually set up little orange cones just like you see for road work, only 6" tall to remind us where we weren't supposed walk.  But then our contractor was able to get started this week.

Monday, I came home to this: 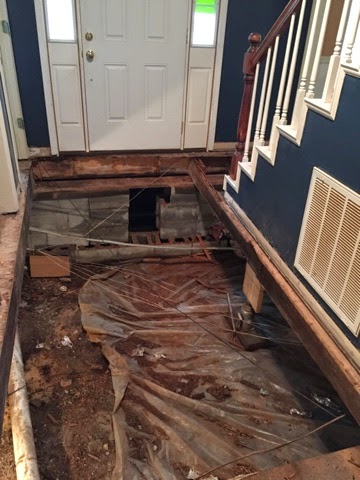 A GINORMOUS mudder truckin' hole in my house.  Like RIGHT. IN. MY. HOUSE.  I don't know why it freaked me out like it did, but it did.  Also?  Everything downstairs had dust on it.  I quickly scrapped dinner plans, called Jeff and told him to come get me and take me to Los Mex. 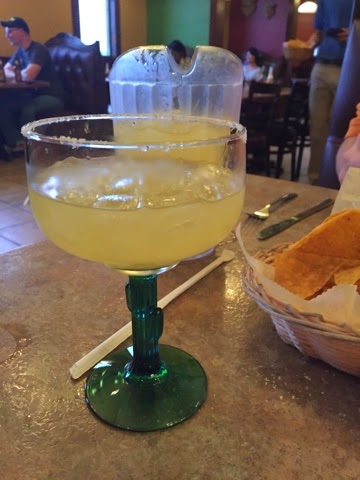 Ahhhh...that's better.  Everything seems a bit more manageable with a pitcher of margaritas and a burrito the size of my head.
So back home we went to the house with the gaping hole in the middle of it.  The dogs had to stay out that night on the back porch. (It was 70 degrees...this is April in Alabama...they weren't suffering as much as they pretended).  The cats were incarcerated in our master suite upstairs.  There was no way around it.  They had access to their litter box, water and food and at least had the bedroom and bathroom to prowl.

I did not sleep well that night.

BESIDES the four pissed off cats that were either attacking our feet or attacking each other or making pitiful noises at the door or bumping the door...I knew my house had a hole in it.  All the way down to the dirt. DIRT, I say!  As I have stated before (here) I am very leery of the thing-that-lives-under-things.  And everyone KNOWS there's all kinds of shit up under a house in the crawl space. Bugs and spiders and snakes and vampires and ghouls and the imps of Satan.
It's a deep rooted phobia, and it kept me up that night.

Thank God, the next day, my foyer looked like this:﻿ 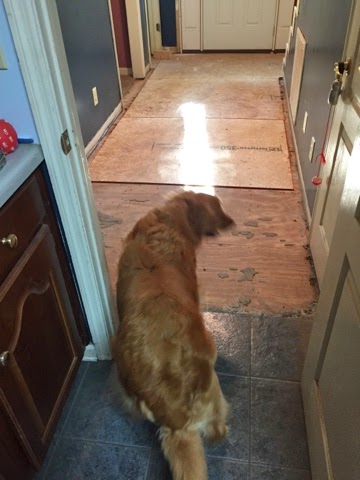 The good news is that the thing that may or may not live under the house can no longer rise up in the middle of the night and murder us all.  The bad news is that Simba is terrified of the sound his own toenails make on the particle board and doesn't want to walk on it.  He will, if we leave him downstairs and call him upstairs, but he kind of scrambles across the floor with his tail tucked under...but when he wags his tail because we're calling him, he whacks himself with his own tail and thinks something just made a grab at his back legs and scampers sideways until he gets to the carpeted area or the stairs. Sigh.

At least I was able to sleep last night...even though we had a 70 pound blonde scaredy cat up in the middle of the bed with us.﻿
﻿